Back in 2016 I came across the Pinch Hold Mug. Instead of having a handle like a traditional mug, it’s sculpted to look like a rockface and requires the drinker to pinch the hold, in a similar way to holding a rock handhold on a crag or indoor climbing wall.

I thought it was a genuinely cool concept so, at the time, I wrote a blog post about it. Unfortunately, though, it went out of stock pretty quickly.

Jump forward to a couple of weeks ago and I noticed that my local climbing shop had it restocked. So I reached out to the guys at ma3t who were kind enough to send us one to take a closer look at.

I’ve been using the Pinch Hold as my main drinking mug over the last week or so and wanted to make a quick video (above) to share my thoughts.

It’s made in Stoke-on-Trent, which is about a three-hour drive from where we’re based in the South West of the UK. As you can see from the video, the mug is really good quality; it’s fully ceramic with the handhold moulded directly into the design of the mug.

Some other climbing-themed mugs I’ve seen have an indoor-climbing-wall hold glued onto a ceramic base instead. In some cases, these can become loose if the adhesive is exposed to too much heat (for example, from a hot drink). The good thing about the Pinch Hold is that there’s no adhesive and the handhold is part of the mug itself.

It’s actually quite easy to hold, at least when using a standard five finger grip, and I haven’t had any problems with the mug slipping. The varied shape of the hold also facilitates a variety of different grips—some being harder than others.

You can use different four, three, and even two finger grips and, because the handhold is asymmetric, holding the mug in your left hand opens up even more options. Though, it’s still fairly easy enough to hold the mug using a full five finger grip for left-handers.

Whether the Pinch Hold Mug is just a bit of fun or whether you can actually increase your grip strength by using it is hard to say. However, I definitely feel that my fingers have to work to hold it, especially when using a harder grip.

So, for newbie climbers especially, I would say that using this mug is bound to have some benefits that will translate over to climbing. At the very least it will get you used to the different ways in which you can approach and grip a hold and will probably result in some increased grip strength over time as well.

Related: How to move from indoor to outdoor rock climbing

For more experienced climbers, it’s just really fun to use. However, it could also be used creatively to warm up before practising on a fingerboard of something.

The box does give you a warning not to use the Pinch Hold Mug with hot drinks, for obvious reasons. But I have been using it to drink hot coffee and tea and, while the handhold heats up a little bit, you can still drink from it as long as you’re careful. But…err…yeah, just bare that warning in mind and don’t forget to chalk up!

Final thoughts and where to buy

So, overall I really like the Pinch Hold mug and would definitely recommend it as a gift for both new and experienced rock climbers alike.

It’s currently available in a handful of climbing shops across the UK, but Dick’s Climbing is also selling it on Amazon for £22.99. As far as I can tell, this is also the best place to get one if you’re in the US, with the total cost including delivery coming to about $40. I’ll keep an eye out, though, and if a shop starts selling them directly in the US, I’ll add a link to this blog post.

Anyway, I hope that answers any questions that you might have had about the Pinch Hold Mug. If I’ve missed anything, feel free to reach out in the comments below and I’ll do my best to answer them. Happy climbing! 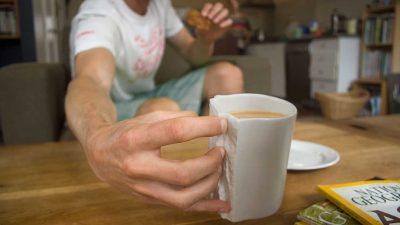