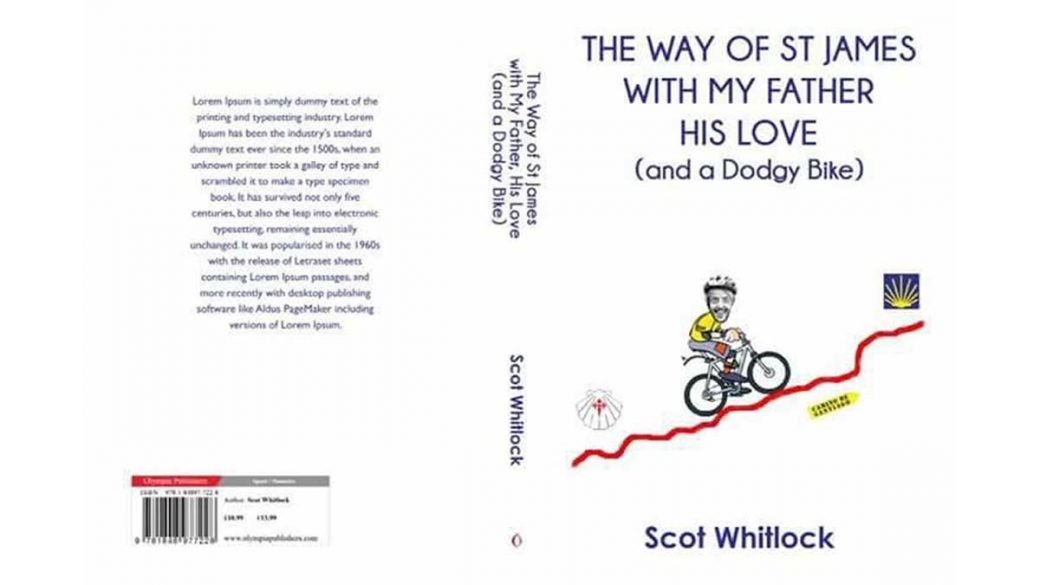 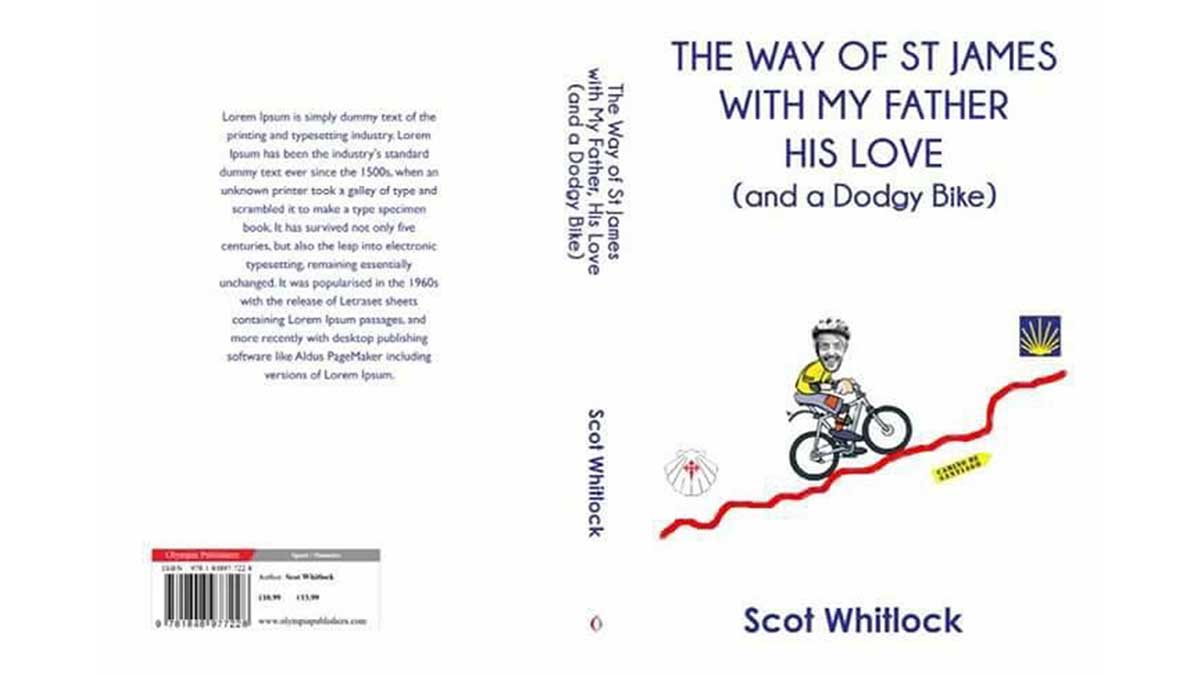 Scot Whitlock is a man who has turned his passion for cycling into a career. Starting off by penning his bicycle trips for his family, he’s now the proud author of two successful books, ‘Simple Words from the Saddle’ and ‘Simply More Words from the Saddle’, which document his cycling travels across the world. Last year we caught up with him to find out how he turned his life around. But today I’m really excited to share a pre-published excerpt of Scot’s third book which is set to be published later on this month.

Scot’s third book: The Way of St James, with my father, his love (and a dodgy bike)

Called ‘The Way of St James, with my father, his love (and a dodgy bike)’, the book details the highs and lows he experienced on a folding bike pedalling the 1,500 kilometres along the Camino de Santiago aka The Way of St James. Following the death of his father, “instead of plummeting into a downward spiral of despair and depression, a surprising reaction overwhelmed me,” Whitlock writes. “I was filled with a powerful purpose to travel the Camino de Santiago as a simple mark of respect. It sounds sufficiently clichéd but simplistically I felt compelled; deep down I needed to display my love, not only to the world but most importantly, to myself.”

‘The Way of St James’ is filled with the hardships and joys of cycling across Spain, as well as the wonderful places he discovers along the way, both geographically and spiritually. Like the route itself, which was once one of the most important Christian pilgrimage routes during the Middle Ages, the book serves as a pilgrimage through Whitlock’s mind as he begins to come to terms with his loss and even makes friends with his bike.

“I wanted to understand what it meant to be a pilgrim and how the modern pilgrim should travel,” Whitlock writes. “Was it just providing a modest chance to explore, or was it a compulsion of penance, for things I had failed to say or do? To be honest, I was hoping for a leap of faith, an opportunity to probe my own inner self and theology, but only time would tell.”

On top of this, the book explores what is it to travel by bike. With the development of technology, the world has become so easy to explore which can only be a good thing, albeit it reduces the time available to reflect, especially on the long journey of life and the meaning and purpose within those lives. Is life the ultimate pilgrimage?

The full book is available from 25 January 2018. It will be available from Olympia Publishers, Amazon and most bookstores at £10.99. But for now, sit back and enjoy this exclusive excerpt from Scot’s new book.

Day One | The beginning | St-Jean-Pied-de-Port to Pamplona

I was stood outside the Pilgrims Office on the Rue de la Citadelle, the rain pelting my head. Only minutes earlier I had obtained a Pilgrim’s Passport or Credençial which is a pre-requisite for any committed (verb – to pledge oneself or to place officially in confinement or custody, both seemed so appropriate on this occasion) pilgrim. The document contains blank spaces on which stamps can be amassed and it cost me a paltry two euros. These stamps can be collected along the route at plenty of places–bars, hotels, churches, town halls–and is essentially proof of your journey. It is necessary if the individual wants to obtain a Compostela (a certificate of accomplishment given to pilgrims) to prove you have either walked a minimum of 100 kilometres or cycled 200 kilometres. I stuffed the papers into my already bulging rucksack and strolled down the uneven and slightly slippery cobbles, the pretty cramped labyrinthine streets were obsessed by Basque style houses with lovely ornate wooden overhangs, and expertly arranged window boxes blossoming with vibrant kaleidoscopic colours, scenting the air.

My immediate task was to assess the weather conditions on the Pyrenees, as the route through to Roncesvalles is subject to sudden extreme changes. In poor weather, the route via Valcarlos is recommended instead of following the Cize Pass, the most popular route for walkers through the mountains. This route is apparently blessed with good surfaces for bikes, with almost all tarmac, and follows the original pilgrims’ route as closely as possible. 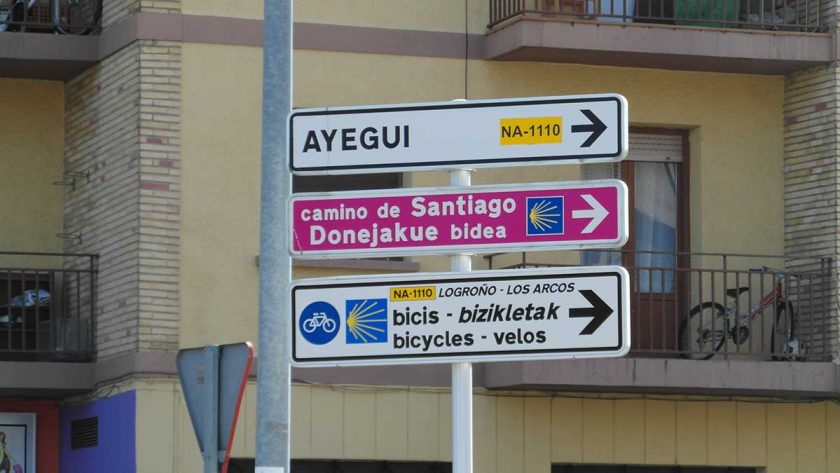 As I unlocked my bike I briefly paused in contemplation, clearly visualising the task that lay ahead; my focus, to pay homage to St James. I made a promise to myself, to keep the image of me laying my hands on the statue of St James fresh in my mind, especially if things deteriorated, either physically or mentally. Thankfully the weather had started to behave. My excitement was now tinged with growing anticipation, I had to accept that my journey had already begun. My immediate focus was the Ibaneta Summit and the monument to Roland, the flamboyant commander of the Charlemagne Army. The memorial marks the top of the pass and is home to a smart chapel built in 1965 and a bell used to guide pilgrims in bad weather. My intention was to deposit a picture of my father somewhere on the pass. I normally chastise the kids for any littering but this was something I felt compelled to do. Anybody questioning my motives would be brushed aside with a typical English approach of pleading a competent ignorance of the local language (which appears synonymous nowadays with our nation).

The clouds had cleared as I set off through the Porte d’Espagne, negotiating the river Nive and its chaste atmospheric bridge before glimpsing a sign stating, ‘Arneguy 8. Frontières de l’Espagne’, the landscapes governed by luxuriant towering trees and splashing waters. The views were gallery quality. The ascent was gradual but never a concern. The N135 is a well-established and well-maintained road surface and after several kilometres, I arrived in Arnéguy. The village is modestly appealing with a number of pilgrims’ hotels and a quantity of shops for the acquisition of provisions and is one of the last French villages on the trail.

Further on, a redundant customs point indicated I had now crossed the border into Spain. After a substantial, lofty trek I reached the first town on the Spanish side, Valcarlos. Its architecture didn’t appear typically Spanish; it was quiet with a smattering of amenities and people. However, its location is resplendent, set in a lovely valley cocooned by a rugged and enticing landscape, providing a natural hillside balcony. Actually, the only real sign I had entered a different country was the contrast in number plates on the occasional speeding car. Here I found a good selection of small hotels, shops, cafés and a bank, but my thoughts were preoccupied by a local iglesia, the sun belatedly peeping from its slumber. Back home I had read enthusiastically about the Church of Santiago in the town, which allegedly contains a life-size representation of Santiago Matamoros, the Spanish name for St James the Moorslayer. 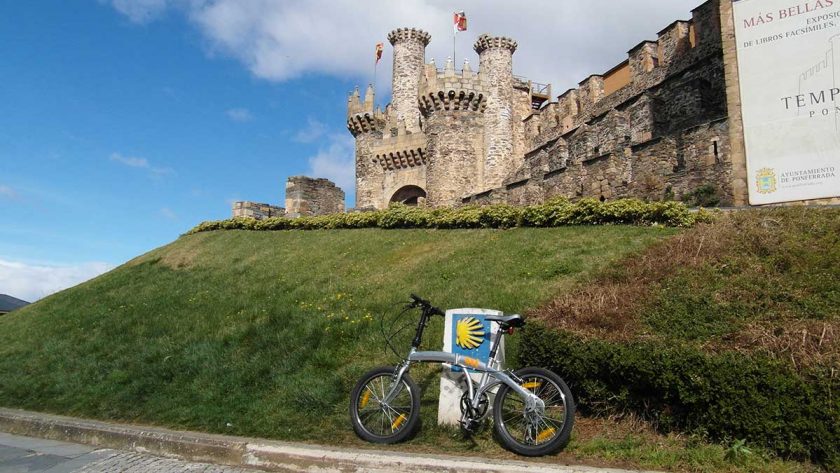 I discovered the church in a tranquil enclave, its pale white façade radiating in the argent sunshine. It was clearly closed, my loud rapping on the door was testament to the fact. However, I was flummoxed by the odd sculpture standing outside, which I was informed is apparently a representation of a group of pilgrims. It looked more like I had interrupted a drug-induced game of chess. I pedalled out of the village, passing another cascading river before whizzing through a nondescript hamlet. At this point the climbing increased notably, the verges dotted with waymarkers embellished with the illustrious shell symbol earmarking the route, which does make it pretty much impossible to get lost. The origins of the scallop shell used as an emblem of the pilgrim is open to many interpretations. It’s often found on the shores of Galicia and has over time taken on a mystical and symbolic meaning, but in reality, it may just derive from a pilgrim having an uncomplicated desire to take home a souvenir in remembrance of their journey. Metaphorically the grooves of the shell converge at a single point which some believe represents the various routes a pilgrim has taken or can take to arrive at St James’s tomb. In practical terms, it’s the perfect size and shape to collect water or food to sustain a weary pilgrim on the trail.

The morning had quickly turned into the afternoon and my ascent was now well established. The scenery was a 360-degree picturesque ensemble of sheer shadowy peaks and enthralling greenery, a fantastical dreamlike landscape. As I closed in on the summit, I noticed an off-road route up through the mountain; could this be quicker? Would it relieve some of the boredom? I deviated from the banal tarmac with trepidation into an alien verdant expanse; overhanging trees and sheer drops required my focus. The surface was in poor condition, more appropriate for rambling than two wheels, a bumpy track that deteriorated into a grassy, boggy trail. As I zipped my fleece I saw my first ice. With heightened apprehension I pedalled onwards and upwards (even slower than previously, if that’s possible). Next, I had to precariously cross a lovely cascading stream; the water was a welcome surprise as it ran over my tired, fraying shoes. Eventually, after much exertion, I arrived at the giddy heights of Ibaneta.

The visibility was poor; suddenly a cold mist had descended. At 1057 metres the pass grants a remarkable spiritual mood which was probably helped by the eerie weather, but the silence was absolute, my faint breath the only sound. The modest chapel and bell looked forlorn and immediately my spirits lifted. Lovingly I deposited my father’s picture amongst the simple makeshift crosses. I sat in reflection, the conditions harsh. There were all kinds of objects used to commemorate loved ones, primitive symbols of hope, in contrasting stages of deterioration. This location is where Charlemagne had realised that before he heard Roland blow his horn, it was too late to go back to help him. As I rested, I had to finally accept that my father had passed. A metaphorical weight had been lifted but more notably I had to accept how exhausted I was. The infamous ascent had completely sapped my energy. Thankfully a lengthy descent followed. I was presented with an unspoilt amphitheatre of glorious greenery. The free-wheel into Roncesvalles was a blast, a torrent of absolute joy and reckless overdue enjoyment. 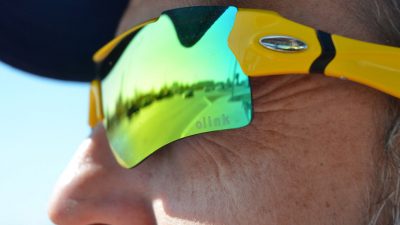 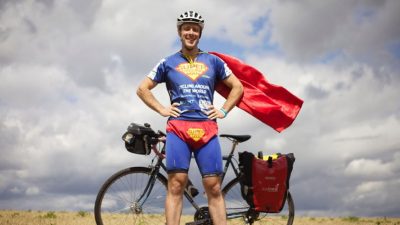 Meet the man cycling across all 7 continents dressed as superman