Winter came early for Candide Thovex and Audi this year, who have just made the ‘Ski Video of the Year’. Creator of the One Of Those Days video series, Thovex has recently directed an innovative new video for automotive brand Audi as part of Audi’s new ‘quattro’ campaign. With it, he might just blow-up the internet; watch the white-knuckle, no-snow (not a single snowflake) trick-packed ski-run and don’t forget to turn up the sound!

The 3-time X-Games gold medallist, Freeride World champion, and state of the art filmmaker has applied his magic touch to another astounding audio visual masterpiece. What makes his latest creation so unique though is that the entirety of the French skier’s performance is orchestrated and filmed without a snowflake in sight.

Filmed in Megève, France this autumn/fall, the video opens with Thevex rocketing down the foothill slopes, dodging a herd of alpine cattle. The wide backcountry skis were an inspired choice—Thevex seems to glide and carve over the tufts of grass as if it was powder. A quick glimpse at oldskool France follows as he passes a trio of farmers with a classic Tour de France commentary blaring out of a vintage black and white.

Somehow he ploughs through the head-high crops (I wonder how many takes that took), emerging during a jump and backflip—seriously cool!

Then it’s onto the tough-stuff; from a wooden bride straight onto the mountain road—his skis ablaze with sparks as he takes a tunnel through the mountain and into the forest.

Golden and red leaves take the place of snow in the fast-pace scene through the woods, before Candide emerges out the other side. A tractor lazily motoring along adds an obstacle to the already gnarly road gap—perfect for a 360.

The film finishes with a flare, as Thovex corkscrews into the back of the Audi Q7…OK, so that last part was probably CGI. 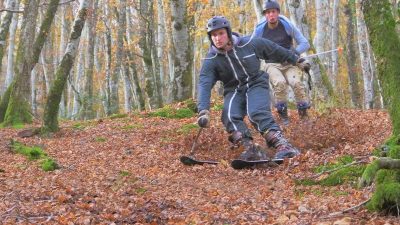 Video: You don’t need snow to ski, just a whole lot of leaves!