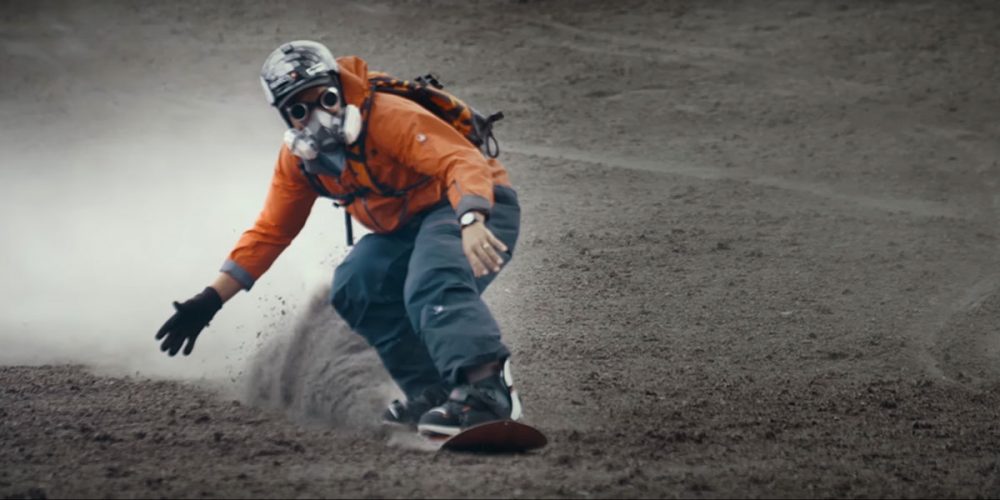 A South Pacific island isn’t usually a place you associate with skiing or snowboarding. Regardless of the fact the average temperature never dips below 23°C and the terrain is very rocky, there isn’t usually any snow. So it proved the perfect location for a trio of pro freeriders to take the sport to new terrain and test their skills.

The video, created in association with North Face, shows freeriders Sam Smoothy, Victor De Le Rue and Xavier de le Rue taking to the slopes of Mount Yasur—one of the most active volcanoes in the world. Yasur, located on Tanna Island, Vanuatu, in the South Pacific Ocean, has been erupting nearly continuously for over three years.

Despite this, Yasur can usually be approached safely and so proved the ideal location for this jaw-dropping shoot.

Speaking with North Face on the idea, Smoothy said:

Basically I was at Xavier’s house in Capbreton and had been chatting about a summer surf trip to some tropical paradise… Xav had put me to work painting his house so I had plenty of time to think. I had seen this footage of this Kiwi guy skiing on ash before and it just sparked me right up. Like me, Xav lives for travelling and exploring new places, and finding fresh perspectives on our sports, so when we talked about it whilst in France and all of this came together into one trip this seemingly silly, impossible dream, made a lot of sense. So we came up with a plan and managed to convince The North Face to make it a reality. Which I still really can’t believe.

Speaking about the experience of riding down a volcano he continued:

For me it was so surreal, like you just shouldn’t be doing this, it is the ultimate fish out of water type situation. Your skis just don’t run the same at all so physically you’re tensing everything trying to hold it all together. And there’s the whole mental side of things—hearing the volcano explode into life, while you stand near the summit, the ground shaking as you stare up into the storm of ash and rock that starts raining down on you, whipped on by wind, and try to see any rocks that might smite you. It is pretty biblical in a sense.

Find out more about the trip and Smoothy’s interview with North Face.