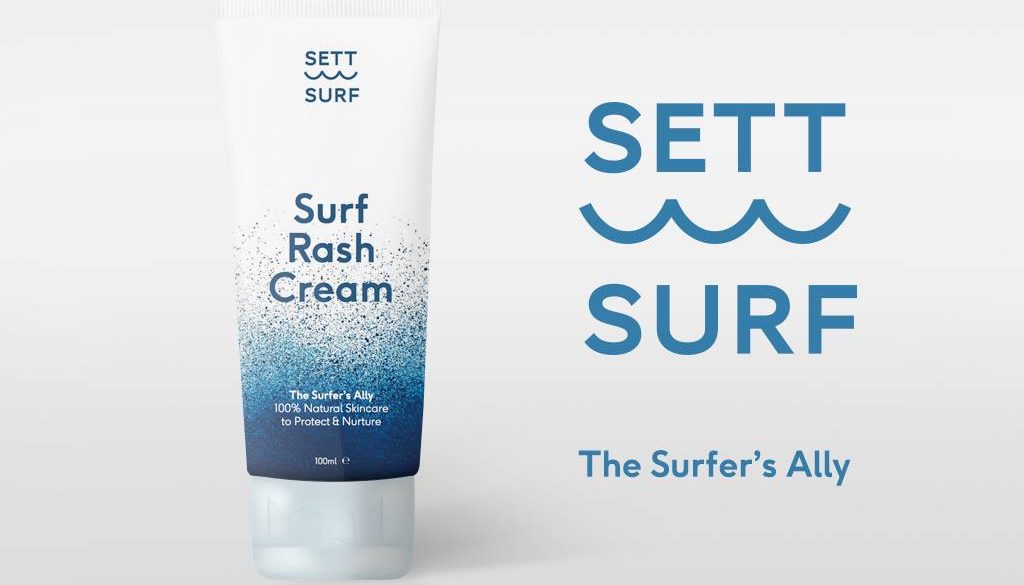 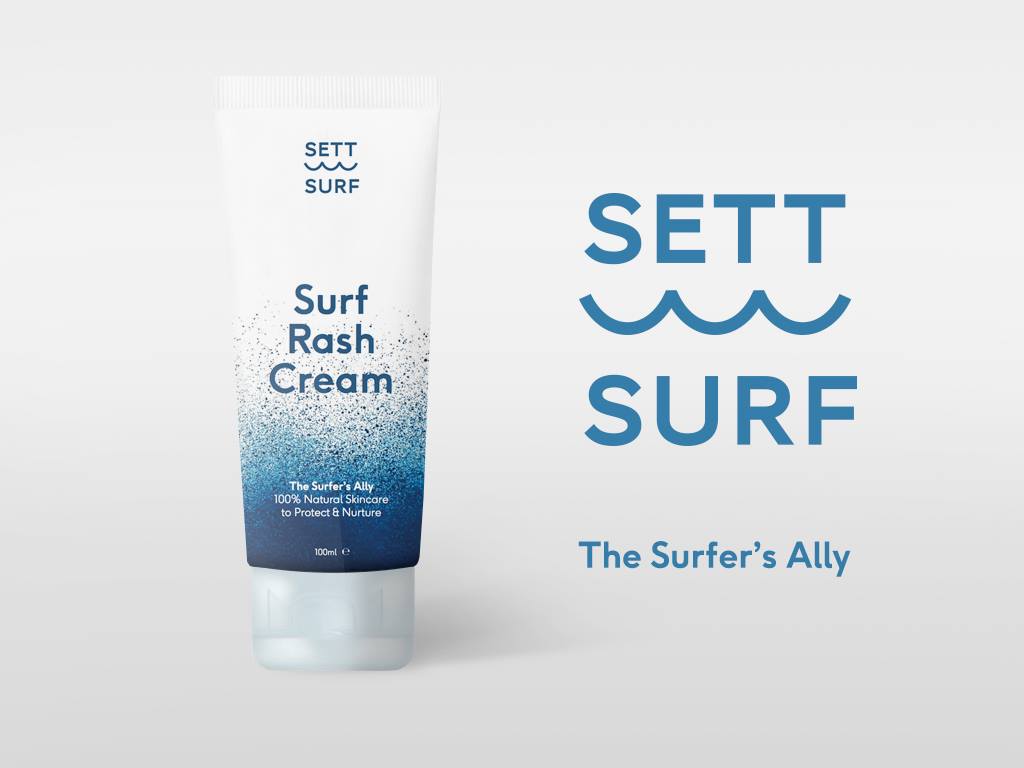 Sett Surf is a new natural surf skincare company, set up by avid surfer and surf-blogger James Marshall, with the aim of solving the long running issue of surfer rash. After successfully raising over £5,000 on kick-starter last December, Sett Surf is now up and running and already looking to expand into new markets. We caught up with James and asked him about his product, the journey he’s been on while setting up the company and plans for the future.

What inspired you to create a natural surf skincare range?

– It was a classic case of having a problem and not being able to find a solution. I went to Hawaii for my birthday and was surfing everyday, but developed this gnarly rash quite quickly that was stopping me from just enjoying my time in the water (and out of the water too, actually). After having a look around, I realised there wasn’t a dedicated solution for surfers & surf rash. Some people used work arounds like Vaseline, but it isn’t practical as it is slippery & greasy, and it is petrol based which I’m not super keen on either. I talked to some other surfers and found many people just suffer in silence with rashes, and I thought, well, maybe I can help. The natural element started as a personal thing whereby if I was going to create something, I wanted it to be natural, but in fact it has turned into one of SETT Surf’s biggest selling points.

What challenges did you face when starting up the company & creating the product?

– Oh man, where do I start? haha. My background was in banking & business strategy, so I knew NOTHING, like zilch, about cosmetics and skincare. I guess I was a bit naive, but I paid this lady to create 40 small pots of cream for me in her kitchen-come-workshop…I say cream, but that is generous. This green sludge looked and smelled hideous, and went mouldy after a month! There was no way I could sell it, but it did give me something tangible to show people and say ‘what do you think of this? Would you buy it? What should I change?’ Etc. Thankfully I now work with a cosmetic consultant, and a fantastic chemist at a contract manufacturer who have been amazing in helping develop the product we now have. The biggest challenge I didn’t think of before I started this was regulation, which is very strict and somewhat costly in the EU. However, I have turned this into a positive, as I know that my product meets very strict requirements that products in other markets simply don’t stand up to, and I think my customers will appreciate that.

What ingredients are in the cream?

– The ingredients I am most excited about are Manuka Honey, Seaweed, Brazilian Papaya (Pawpaw) and Aloe Vera – kind of a cocktail of the best ingredients found in different skincare products; they were chosen to soothe the skin, remove dead skin cells, and support the skin with what it needs to stay in great condition. There are also some natural oils like Rosehip and Teatree oil to help with sun damage and antibacterial properties, as well as moisturisers like Coconut oil and Olive Butter, and finally some natural preservatives, and emulsifiers to give it a nice feel that sinks into the skin.

Tell us more about Surfaid. Why did you choose to support them?

– I want SETT Surf to help something, it was a matter of what do I want to try and help. It was actually slightly over-whelming when you try to figure out what cause to support because there are so many very worthy causes, run by amazingly dedicated people. I chose SurfAid for two reasons; firstly it is focussed on human health, specifically helping provide access to treatment for illnesses that in the developed world we don’t really consider a threat, but that run riot in certain parts of the developing world. Secondly, I think every surfer has a special connection with Indonesia whether it be in person, or from watching countless videos from perfect reef passes. I have been lucky enough to visit Indonesia a number of times, and the people are so accommodating and friendly, and it breaks my heart to think of a preventable illness running amok in one of the villages. So I want to do something about it. Dr Dave Jenkin’s (SurfAid founder) Ted Talk in Manly is super inspiring too – I highly recommend watching it on YouTube.

You also run a blog called Inside Surf, which highlights the diversity of the surfing community. What’s been one of the most memorable interviews and why?

– Probably when I interviewed Matt Luttrell, the Editor of Trim Hawaii magazine. Matt was a friend of a friend who I emailed asking for an interview as I wanted to speak to someone from within the surf industry. I was really nervous about it, but luckily Matt obliged; in fact he was incredibly nice and the interview was mind-blowing. I know he is a magazine editor, and an artist with words, but the way he described surfing was like poetry and I loved it. The passion that we all feel towards surfing was articulated immaculately. To cap it off, our interview was interrupted by a guy who I didn’t recognise at the time, but I now know was Fred Hemmings, the 1968 world surfing Champion! I went back and told my Dad and he was absolutely gobsmacked because he idolised Fred Hemmings growing up! Since the interview, Matt has helped me & SETT Surf immensely, and I now consider him a good friend too.

What’s next for Sett Surf. Are you planning to launch any other products in the future?

– First & foremost I will work on getting the first production run out to my Kickstarter backers – they have put their faith in me, and I need to return the favour. After that, I will work on getting SETT Surf into retail shops (any suggestions or contacts, please let me know!) and part of that will include extending the product range. I have a number of ideas for new products which need to be researched and evaluated before I decide which route to go down, but that is all part of the fun and games (again, any suggestions or requests, gladly welcomed). Ultimately I just want to help surfers, so if I can manage to do that, I will be pretty happy.

If you run or know a local surf shop that would be interested in stocking SETT SURF please leave a comment below and contact James at settsurf.com.

James Marshall is a surf blogger at Inside Surf and creator of SETT SURF. Stay tuned to ADAPT Network for more from James in the near future. 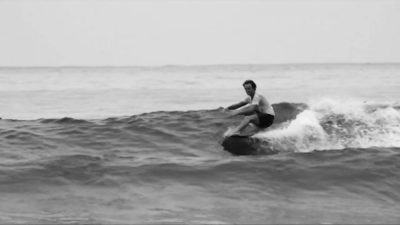 Salvaged – A Surf Film that Captures the Essense of Wave Riding 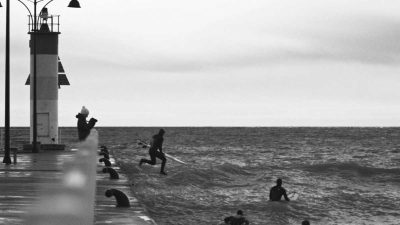